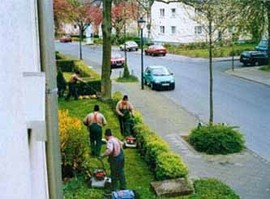 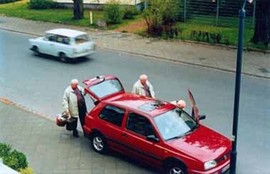 On show at Galerie Januar are works from Duration Studies and Worauf müssen Sie sich einstellen?

﻿In 1998 I moved to Düsseldorf, and soon discovered that the Neanderthal valley was not far away. It was very exciting that the familiar word "Neanderthal" was actually a place that could be visited, and I remember standing on the road there waiting to feel the immensity of hundreds of thousands of years of human development come crushing into my skull.
What came instead was the frustrating experience of there being nothing particularly spectacular to see, except for a bad concrete sculpture of a caveman with a club and a hairy chest. I began to photograph my neighbours, from my apartment windows, going about their daily routines, documenting their small progressions, determined that there were other ways to understand the wonder of evolution. The Duration Studies are collections of these montaged moments.

"Worauf müssen Sie sich einstellen?" (What do you have to bear in mind?) is a frequently repeated question in official German drivers' licence theory exams. The question accompanies photos of possible situations that a driver might meet, and asks the student/viewer to imagine being in the scene portrayed, and to predict what might happen in the following moments. This required intervention of the viewer breaks traditional, temporal and spatial, constraints of photographs. The photographed moment is no longer past, but through the imagination of the viewer, also extends into the future.
The works are digitally-montaged images, which emulate those from theoretical driving tests. Four photographs taken from slightly different perspectives are joined together in a grid to recreate typical driving scenarios. The seams do not match perfectly and sometimes details are repeated, marking the passage of time as a person crosses the road, or skewing the space with a double horizon.